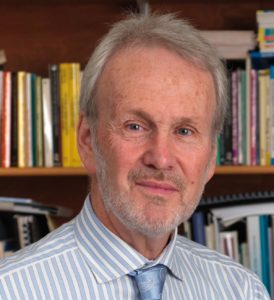 Robin Alexander is Fellow of Wolfson College at the University of Cambridge and Professor of Education Emeritus at the University of Warwick. He is a Fellow of the British Academy (FBA) and the Academy of Social Sciences (FAcSS), past President of the British Association for International and Comparative Education (BAICE), and former Director of the Cambridge Primary Review and Chair of the Cambridge Primary Review Trust.

An alumnus of the universities of Cambridge, Durham, London and Manchester, Alexander has taught in schools and higher education, holding senior posts at the universities of Leeds, Warwick, Cambridge and York, and has served on government advisory bodies and official enquiries. He has undertaken research in many countries, notably Britain, France, India, Russia and the United States, and has worked in development education in India and Bangladesh. He has held two Leverhulme Research Fellowships and visiting academic positions in Australia, Chile, Hong Kong and Singapore, and has been awarded honorary doctorates by three UK universities.

Robin Alexander has written or edited over 320 publications. His early books included three edited collections on teacher education (1979-81), followed by The Self-Evaluating Institution (1982), Primary Teaching (1984) and Change in Teacher Education (1984). Then, from large-scale studies of systemic educational reform and its classroom impact came Changing Primary Practice (1989), Versions of Primary Education (1995) and Policy and Practice in Primary Education: local initiative, national agenda (1997). This corpus included work on policy, pedagogy, classroom studies, teacher education, curriculum and evaluation, usually but not exclusively in the primary phase of education, and all of it in the UK.

From the mid-1990s his research increasingly pursued international and comparative themes. The two volumes of Learning from Comparing: new directions in comparative education research (1999 and 2000) brought together leading experts to re-assess the scope and methods of comparative enquiry. Culture and Pedagogy: international comparisons in primary education (Blackwell 2001) entailed fieldwork in five countries and greatly extended Alexander’s take on pedagogy and classroom discourse – hitherto somewhat neglected in comparative enquiry – and won the AERA Outstanding Book Award and the SES Book Awards First Prize. He built on this work in Essays on Pedagogy (2008) and, in the context of the UN Millennium Development Goals, Education for All, the Quality Imperative and the Problem of Pedagogy (2008).

Local, national and international come together in his extensive and continuing work on classroom talk reform and the advancement of dialogic teaching:  Towards Dialogic Teaching: rethinking classroom talk (1st edition 2004, 5th edition 2017), Education as Dialogue (2006), A Dialogic Teaching Companion (2020) and numerous articles. His most ambitious research initiative in this field to date was the 2014-17 project supported by Education Endowment Foundation which devised and successfully subjected to randomised control trial a large-scale programme for using dialogic teaching to improve the engagement and learning of disadvantaged students.

Meanwhile, Alexander’s lifelong commitment to the cause of primary education led to the Cambridge Primary Review (CPR), which he initiated in 2004. Supported by Esmée Fairbairn Foundation, this independent enquiry into the condition and future of primary education in England ran from 2006-10 and remains the largest and most comprehensive such investigation since the 1960s. CPR published 31 interim reports between 2007 and 2009 before its 600-page final report Children, their World, their Education (2010) and the 850-page companion volume The Cambridge Primary Review Research Surveys (2010), both of which Alexander edited and lead-authored. With continuing support from its sponsor, Esmée Fairbairn Foundation, the Review then entered a phase of dissemination, policy engagement and network-building (2010-12) and from 2013-17 was succeeded by Cambridge Primary Review Trust (CPRT), a not-for-profit organisation supported by Pearson and dedicated to consolidating the Review’s work by building nation-wide professional networks and commissioning new research. For this work Alexander received the National Union of Teachers Jarvis Award and the BERA/Sage Public Impact Award.